You can read more about P vs NP here.

Kotlin is now Google’s preferred choice for Android app development, but where did the programming language originally come from? Lead developer, Andrey Breslav, tells the story of how he began working on the project at JetBrains during his PhD.

Interview conducted at JetBrains HQ in St Petersburg, Russia. Produced by Tom Crawford, with thanks to ITMO University and JetBrains. 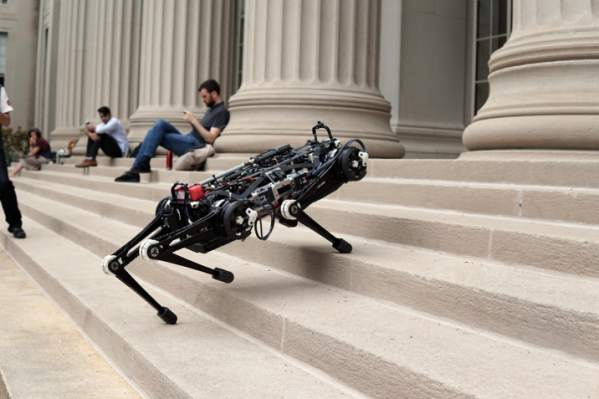 Robots are developing at an incredible rate, with their ability to perform real-world tasks improving almost by the minute. Such rapid development doesn’t come without downsides, and there are many people who believe that artificial intelligence (AI) could become too powerful, leading to the possibility of robots taking our jobs, or perhaps even taking over the world! Whilst these fears might not be completely unjustified, let’s instead focus on the positives for the time being and marvel at the astonishing accomplishments being made in the field of robotics.

The Cheetah robot, developed by scientists at MIT, is roughly the same shape and size as a small dog, and has been designed to be able to walk across difficult terrains efficiently and effectively. Such a trait is particularly useful when we need to explore dangerous and hazardous environments that may be unsuitable for humans, such as the Fukushima nuclear power plant that collapsed in Japan in 2011. Like all robots, it uses algorithms to help it to navigate, stabilise itself, and ensure that its movements are natural. The latest version, the Cheetah 3, was unveiled in early July, and I think it’s fair to say that it wouldn’t look too far out of place in the animal kingdom!

Perhaps the most impressive feature of the Cheetah 3 is that the strangely adorable hunk of metal performs the majority of its navigation without any visual input, meaning that it is effectively blind. The researchers at MIT believe that this is a more robust way to design the robot, since visual data can be noisy and unreliable, whereas an input such as touch is always available. Let’s imagine that you are in a pitch-black room; how would you find your way around? Your eyes are pretty much useless, but you can use your sense of touch to feel around the environment, making sure that you don’t bump into walls or obstacles. It’s also important to step carefully, so that you don’t misjudge where the floor is, or tread too strongly and break through something. The Cheetah 3 takes all of this into account as it gracefully glides across even the roughest terrain.

One of the key ideas that was addressed in the new model is contact detection. This means that the robot is able to work out when to commit to putting pressure on a step, or whether it should swing its leg instead, based on the surface that it is stepping onto. This has a massive impact on its ability to balance when it is walking on rough terrain, or one that is full of different obstacles; it also makes each step quicker and more natural. Going back to our dark room, you are likely to step quite tentatively if you can’t see where you are going as this will allow you to react to whatever surface you come into contact with, and adjust your motion as required. With the latest update, the clever ‘canine’ can make these adjustments by itself in a natural manner.

The Cheetah 3 also contains a new and improved prediction model. This can calculate how much pressure will need to be applied to each leg when it experiences a force, by estimating what will happen in half a second’s time. Returning once again to our pitch-black room, imagine how great it would be if you were able to predict what you’re about to step on and adjust your path accordingly – no more treading on sharp objects or stubbing your toe! The scientists tested the power of the new model by kicking the robot when it was walking on a treadmill. Using its prediction algorithm, the Cheetah 3 was able to quickly calculate the forces it needed to exert in order to correctly balance itself again and keep moving. Whilst I can confirm that no animals were harmed in the making of this robot, whether or not the robot itself felt harm is perhaps a question for another day…

The new and improved Cheetah 3 is certainly one of the more remarkable recent accomplishments in the field of robotics. Its natural movements and quick corrections mean that it excellently mimics animal navigation, and it is easy to see how such a robot would be extremely useful for exploring dangerous terrains. Such incredible progress in the study of robotics is as impressive and exciting as it is scary. While it is extraordinary that we are able to replicate animal movements so closely, it has rightly made many people slightly worried; will robots eventually be able to completely replace us? We can only cross our fingers that these critters have no plans for world domination just yet…