The third puzzle in the new feature from Tom Rocks Maths – check out the question below and send your answers to @tomrocksmaths on Twitter, Facebook, Instagram or via the contact form on my website. The answer to the last puzzle can be found here.

Can you place the (extremely) famous mathematicians below in order of the year that they were born, earliest first? Bonus points for telling me what they studied.

WARNING: answer below image so scroll slowly to avoid revealing it accidentally. 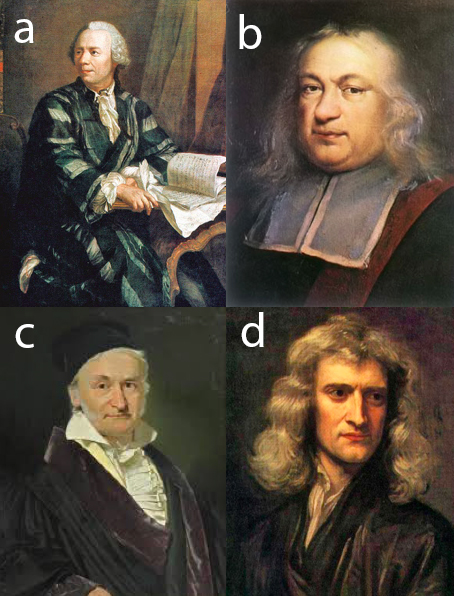 b. Fermat: 1601-1665 – The French mathematician behind the infamous ‘Last Theorem’ written in the margins of his copy of Arithmetica in 1637. The theorem was finally shown to be true by Andrew Wiles 358 years later.

d. Newton: 1643-1727 – Most famous for his formulation of the Law of Gravity, but he also made significant contributions to geometry and is credited with developing calculus alongside Leibniz.

c. Gauss: 1777-1855 – Like Euler, Gauss worked across all branches of maths and made significant contributions to Statistics with the Gaussian Distribution and physics with Gauss’ Flux Law.

One thought on “A mathematicians age is but a number…”