Often in Mathematics problems that are easy to state turn out to be extremely difficult to solve. Two hundred and seventy-five years ago, Goldbach wrote a letter to the famous Swiss mathematician Leonhard Euler in which he wrote the simple statement:

“Every even integer greater than 2 can be expressed as the sum of two primes.”

Just in case you are not up to speed with your maths (and let’s face it why would you be if you’re not a mathematician), let’s break this statement down. The even integers are the numbers divisible by two: 2, 4, 6, 8, …, 256, … and so on. The prime numbers are the ones that can only be obtained by multiplying one by themselves. For example, 3 and 5 are prime numbers because 3=1×3 and 5=1×5 and they have no other representations as a product of two numbers. However, 6 for instance is not prime because 6=1×6=2×3. In fact, all even integers, greater than 2 that were mentioned above, are not primes because they are all divisible by 2 and therefore can be represented as a product of two numbers in at least two ways: 4=1×4=2×2, 6=1×6=2×3, 8=1×8=2×4 etc.

A nice way to represent the conjecture visually is through a “pyramid” and because we all love pretty pictures let’s see how this magic happens.

First, we write all of the prime numbers on two of the sides of a triangle as below: 2, 3, 5, 7 etc. We then draw a line leaving each prime number which is parallel to the opposite side of the triangle (stick with me), and finally at the points of intersection of these lines, we write the sum of the numbers. It sounds more complicated than it is as you’ll see with the following example. In the picture below, take the blue line coming out of the number 7 on the left and the red line coming out from the number 11 on the right. They intersect at 18 because 11+7=18. This means that the even integer 18 can be represented as a sum of the two prime numbers 11 and 7. If you look at the intersections of all of the red and blue lines in the pyramid, you’ll see that we actually get all of the even numbers. In other words, any even integer can be written as the sum of two prime numbers, and we can see what those two numbers are by finding the corresponding intersection on our diagram. This is Goldbach’s Conjecture. 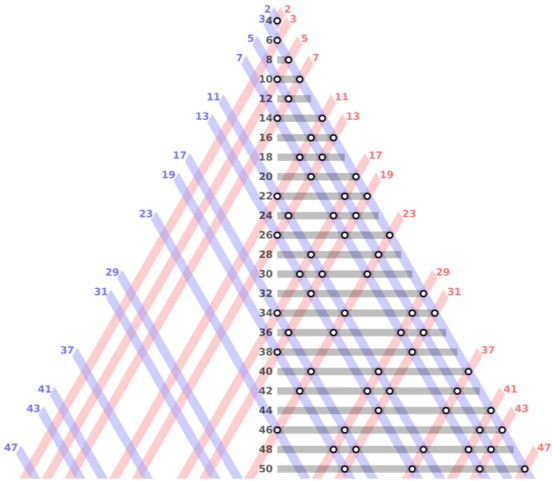 We were able to quickly check whether 96 satisfies Goldbach’s conjecture because the number is relatively small. It becomes much harder to make these checks for larger numbers. It’s been verified with the use of a computer that the conjecture is true for numbers as big as 4×1018 and this is why the conjecture is believed to be true, but we do not yet have a formal mathematical proof. And being mathematicians, we cannot say something is true until we can prove it.

You may be wondering why on earth mathematicians are spending their time and effort to prove this seemingly random result about prime numbers? Is it really that important? Whilst you may have a valid point about the applications of this particular conjecture, the value in proving such a result is not in the statement itself, but rather in the new methods, theories and techniques that will need to be developed to solve the problem. So, in 20, 10 or even 2 years from now when you hear that Goldbach’s conjecture has been proved, you should be happy not because we now know for sure that it’s true, but rather because some incredible new area of mathematics has been developed in the process. And who knows, this new area of maths may even pose a new, even more complicated conjecture that will occupy mathematicians for the next 275 years…

NEW VIDEO: How do we define a subspace of a larger vector space? And what is the Subspace Test? Essential learning for university/college level linear algebra. Premieres today at 3pm (GMT) - see you in the live chat! Watch on the Tom Rocks Maths YouTube channel (link on profile) #tomrocksmaths #linearalgebra #subspacetest
Tattoo #47 - Question Mark Cat. It’s a cat made from a question mark. Tattoo by @nat_von_b. #tomrocksmaths #cattattoo #questionmarkcat
Are you even a tourist in Copenhagen if you don’t take a photo with the Little Mermaid statue? The fairy tales of Hans Christian Andersen span 9 volumes with 156 stories which have been translated into 125 languages. He lived until the age of 70, so assuming he started writing at the age of 20, how many stories did he write each year? And more importantly why is the answer pi? #tomrocksmaths #copenhagen #littlemermaid
Very excited to be joining the legendary members of Festival Of The Spoken Nerd on stage @ri_science for 'An Evening Of Unnecessary Detail' on Feb 26th. I will again be attempting to do some comedy (warning: results may vary). Image: mock-up of what the show might look like… Get your tickets via the ‘Events’ page at tomrocksmaths.com (link on profile) #tomrocksmaths #FOTSN #royalinstitution
The final article from the brilliant Ioana Bouros looks at the Mohr-Mascheroni Theorem and how we can construct all Euclidean objects using only a compass... Featuring lots of example videos for you to follow along with at home - enjoy! Read/watch at tomrocksmaths.com (link on profile) #tomrocksmaths #mohr #mascheroni
The Latin Bridge in Sarajevo where Archduke Franz Ferdinand and his wife Sophie Duchess of Hohenberg were assassinated in June 1914 - often described as one of the key events which led to World War I. The Archduke was heir presumptive to the Austro-Hungarian throne which at its peak covered regions of 10 different countries. Can you name them all? #tomrocksmaths #franzferdinand #sarajevo