Hands up if you like ice cream? And your favourite brand? I’m not sure I could pick a favourite myself, but Baskin-Robbins is certainly up there. They have a total of 31 flavours of ice cream which means the name of their shops in Japan literally translates as ’31 Ice Cream’. In theory a great idea, but what if they discover a magical new thirty-second flavour…

Aside from frozen goods, thirty-one is also the number of teams in the National Hockey League, with 24 coming from the US and 7 from their Northern neighbours Canada. Each season, the teams battle it out to win the Stanley Cup — the oldest trophy to be awarded in professional sport in North America, and also the one with the infamously large base (see below). Originally, key members of the winning team were engraved on the base, which means its grown a fair few inches over the past 126 years. However, these days the oldest band is removed and replaced with a new one to prevent the trophy from getting any bigger. Less fun no doubt, but perhaps sensible given its already considerable size… 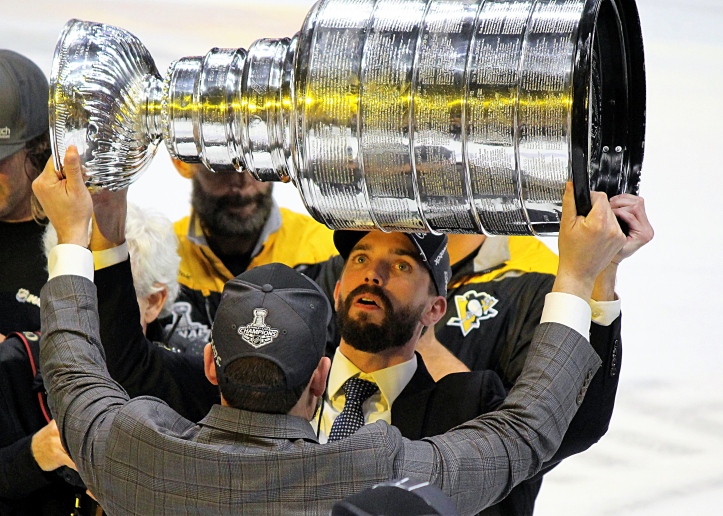 Thirty-one is also a Mersenne Prime — the third such one in fact. A Mersenne Prime is a prime number that can be expressed as exactly one less than a power of two: 2^n — 1 for some positive whole number n. To get 31, we take n=5: 2⁵ = 2 x 2 x 2 x 2 x 2 = 32 minus 1 gives 31. A perhaps surprisingly large (and possibly infinite) amount of prime numbers take this form, with the current largest known prime number also being a Mersenne Prime: 2⁸²⁵⁸⁹⁹³³–1 = a number with 24,862,048 digits, aka too many for me to write out here!

Sticking with maths, thirty-two has the very nice property that it can be written as 1 to the power 1 plus 2 to the power 2 plus three to the power three, or in its neatest form: 1¹ + 2² + 3³ = 32. Here’s a challenge for you: can you work out the next largest number that follows the same pattern?

Outside of the mathematical world, thirty-two is the number of completed piano sonatas by Ludwig van Beethoven; the number of black (or white) squares, and total number of pieces on a chessboard; the number of teeth generally found in an adult human; and the number of described physical characteristics of the historical Buddha, according to the text of the Pāli Canon in the Theravada Buddhist tradition. It’s a pretty long list, but I think it is best enjoyed in its entirety, so here you go:

Let’s start with the bad. Thirty-three is one of the symbols of the Ku Klux Klan, with K being the 11th letter of the alphabet and 3 x 11 or 3 K’s giving 33. It is also believed to be the age of Jesus when he was crucified by the Romans.

On a more positive note, 33 is the longest winning streak ever recorded in NBA history, which was achieved by the Los Angeles Lakers in the 1971–72 season. We also find 33 vertebrae in a normal human spine when the bones that form the coccyx (the tail-like part at the bottom) are counted individually.

Now I don’t say this often — mainly because I think I’m supposed to be impartial when writing these — but this next fun fact is one of my all-time favourites. Long playing records, or LPs as they are more commonly known, are referred to as 33’s in the record industry, because they rotate 33 and a third times per minute when playing on a gramophone. So, next time you see a record player you know what to do…

Looking for whales in Hermanus, South Africa - one of the premier whale watching locations in the world. The Southern Right Whale is estimated to be growing at 7% per year. If there were 10,000 in 2008 (estimated by National Geographic), in what year will the population reach 6 figures? #tomrocksmaths #whalewatching #southernrightwhale
Penguin and a rainbow - what a glorious combination :). African penguins can swim up to speeds of 12mph, and hold their breath for around 2.5 minutes. If they travel at maximum speed how far can they go underwater? (HINT: you can do this without a calculator by thinking about what proportion of an hour 2.5 minutes equates to). #tomrocksmaths #penguin #rainbow
I made a new friend :). In the wild, elephants may feed for up to 16 hours a day, consuming approximately 300 pounds of food. This gives a rate of 18.75 pounds per hour. A human typically consumes 4 pounds of food per day - meaning we would need to eat all of our meals in under 13 minutes to keep up with an elephant! #tomrocksmaths #elephant #safari
Did you know giraffes only have 7 neck bones - the same as a human or any other mammal - though of course they are much longer than ours, reaching up to 10 inches long. If all the bones were at maximum size, would the neck be taller than me? (I’m 6 foot). #tomrocksmaths #giraffe #safari
Wild dogs are an endangered species with only 4 remaining populations - one of which is in Kruger National Park. There are approximately 500 so we were incredibly lucky to see two separate groups of around 20 individuals. As the mathematician of the group I was naturally in charge of counting them… #tomrocksmaths #wilddogs #kruger
Let the fun begin. Kruger National Park is almost 20,000 square kilometres in size, with approximately 2000 lions, 1000 leopards, and 200 cheetahs. What size area would I need to cover to have a chance of finding each species of big cat? #tomrocksmaths #safari #kruger