“30kg of plastic has been found in a blue whale’s stomach: how much would that be if a person swallowed just as much proportional to their own bodyweight?” Tom Crawford from Oxford began his guest lecture at Hebel-Gymnasium with this question. The students calculated that you’d find six (empty) plastic shopping bags in a human stomach. The other results worked out over the course of the entertaining presentation were also very impressive.

Tom Crawford doesn’t just have rock music as a hobby, rather with his tattoos and piercings, he looks like a rockstar too – though his tattoos are all to do with maths: since for example, the decimal places of “e” (Euler’s number) wind around his arm, the number pi is also encoded in an infinite series. On his YouTube channel “Tom rocks maths”, he presents science in an entertaining way – sometimes even pieces of clothing fly off during stripteases: “I want to show that maths isn’t always just super serious but it can also be fun.” 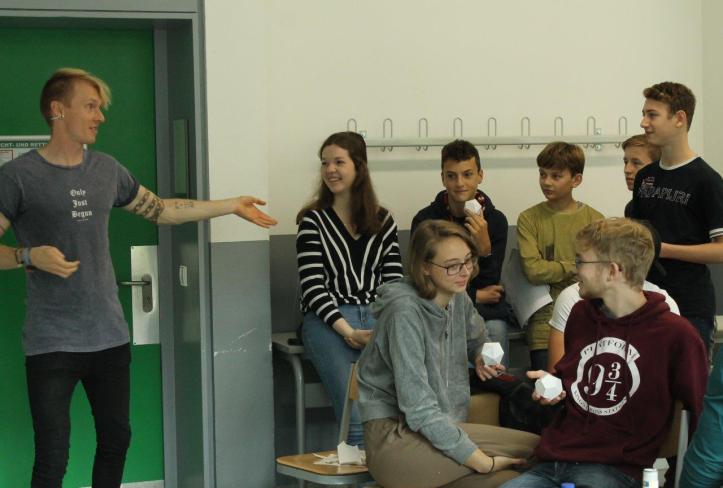 The mathematics lecturer is currently part of the Heidelberg Laureate Forum in Heidelberg. This is where the best maths and computer scientists in the world are meeting up with junior researchers and journalists. Crawford came to Schwetzingen at the invitation of maths teacher Birgit Schillinger. He brought along some exciting questions. The common theme was Tom’s favourite number, pi, which is used in so many formulas. How many ping pong balls are needed to lift the sunken Titanic off the ground? Which factors are involved when a footballer bends a ball so that it flies in an arc past the wall into the goal? When calculating the trajectory, several physical variables play a role. But how? Crawford studied the mathematics behind it. His doctoral thesis was on fluid mechanics: What path does a river take when it flows into the sea? The findings help us to understand sea pollution and possibly help to stop it.

At the end, the Hebelians made Platonic solids, of which, amazingly, there are only five. Strange? No, Tom explains this number by the sum of the angles at the corners – all very logical! Finally a student’s question, which example in mathematics has impressed Tom the most: “It is terrific how the wave characteristic of light follows from Maxwell’s equations, which deal with electricity and magnetism, with only the help of mathematics. Maths is just awesome!”

Thanks to Cameron Bunney for the translation.

The original article in Schwetzingen can be found here.

I made a new friend :). In the wild, elephants may feed for up to 16 hours a day, consuming approximately 300 pounds of food. This gives a rate of 18.75 pounds per hour. A human typically consumes 4 pounds of food per day - meaning we would need to eat all of our meals in under 13 minutes to keep up with an elephant! #tomrocksmaths #elephant #safari
Did you know giraffes only have 7 neck bones - the same as a human or any other mammal - though of course they are much longer than ours, reaching up to 10 inches long. If all the bones were at maximum size, would the neck be taller than me? (I’m 6 foot). #tomrocksmaths #giraffe #safari
Wild dogs are an endangered species with only 4 remaining populations - one of which is in Kruger National Park. There are approximately 500 so we were incredibly lucky to see two separate groups of around 20 individuals. As the mathematician of the group I was naturally in charge of counting them… #tomrocksmaths #wilddogs #kruger
Let the fun begin. Kruger National Park is almost 20,000 square kilometres in size, with approximately 2000 lions, 1000 leopards, and 200 cheetahs. What size area would I need to cover to have a chance of finding each species of big cat? #tomrocksmaths #safari #kruger
Tattoo #42 - Bring Me The Horizon @bringmethehorizon. "That’s the Spirit" and “Sempiternal” are two of my favourite ever albums, with the latter being one of my first introductions to heavier music (that I really enjoyed). Check out ‘Shadow Moses’ for a taste of what I mean :) #tomrocksmaths #bmth #umbrella
NEW VIDEO: Watch me and @sparksmaths deconstruct the SAT Maths Exam we took last week… Premieres at 4pm (UK time) - join us in the live chat to find out who has the highest score! Watch at tomrocksmaths.com (link on profile) #tomrocksmaths #sparksmaths #SATexam