Just as humans have sought to explain the world around them through religions, arts, and fables, so too have they attempted to explain a multitude of phenomena from the beginning of time through the discovery of patterns, rules, and sequences. It is undeniably these patterns that constitute an integral part of mathematics, which itself can be defined as the study of patterns, number, and shape. However, can order and patterns be found everywhere, and what does this mean for us as humans?

The ancient philosophical idea of the ‘harmony of the spheres’ itself sought to explain the movements of celestial bodies through relationships to mathematical equations, which themselves corresponded to music notes and harmony. Attributed to Pythagoras, this extremely early mathematical example illustrates the innate human need to explain the world around us, and the use of pattern and order to do this. In fact, the human brain’s ability to recognise patterns due to an increased number of neural networks in its outer layers is arguably a significant factor in the evolution of the human race.

Patterns are present throughout mathematics, from sequences like Fibonacci’s where each term is the sum of the two previous terms, to logarithmic spirals and the famed search for the answer to the Riemann hypothesis. However, an example which illustrates beyond all else humankind’s desire to find pattern everywhere is that of chaos theory.

A key pioneer of chaos theory was mathematician and meteorologist Edward Norton Lorenz, whose work with computer simulations of weather had crucial implications on chaos theory as a whole. When re-attempting a computer simulation of meteorological events, Lorenz decided to start the simulation in the middle rather than re-starting the whole enterprise. He chose to enter the data from a printout of the values taken during the initial simulation in order to achieve this. However, the essential twist of fate occurred only due to a rounding error: whilst the simulation rounded to 6 decimal places, Lorenz’s print-out was rounded to 3 decimal places. This apparently negligible error had a significant impact on his work, with the weather simulation turning out widely different values to the previous iteration. Lorenz had discovered that tiny changes at one time could have huge consequences at a later date.

This has since become known as ‘the butterfly effect’, due to the common analogy that the flap of a butterfly’s wings in one part of the world can eventually cause a tornado in another (through a long series of meteorological events). In terms of the implications upon chaos theory, the butterfly effect is vital, since a generally accepted definition of a chaotic dynamical system is that it is sensitive to initial conditions (meaning that a small event at one point can have substantial future implications), it is topologically transitive (meaning that over time, the system can transform so that any given region can overlap with another given region), and it has dense periodic orbits (meaning that every point in the space is approached by periodic orbits, where periodic orbits are simply paths within the system which repeat). Interestingly, although the sensitivity to initial conditions is the most significant of these three properties, it is effectively implied by the very existence of the other two.

When considering the implications of chaos theory on the human desire to explain the inexplicable, the significance of the sensitivity to initial conditions cannot be underestimated. This is because it is this property that actually sheds some light on chaotic systems in the first place. The very fact that the later behaviour of the system is influenced by early conditions must mean that the behaviour of the system overall is controlled by something – thus, chaotic systems can be explained.

Another key aspect of chaos theory that links heavily to its implications within the natural world is the idea of ‘strange attractors’. In dynamical systems, an attractor is a set of values towards which the system evolves, no matter how widely varied the initial conditions of the system are. Attractors are defined as ‘strange’ if they are fractal in nature. Again, it was Edward Norton Lorenz who unearthed the first strange attractors. He simplified the Navier-Stokes equations (a set of fluid dynamics equations), leading to these equations:

Once plotted in three-dimensional space, these images are created: 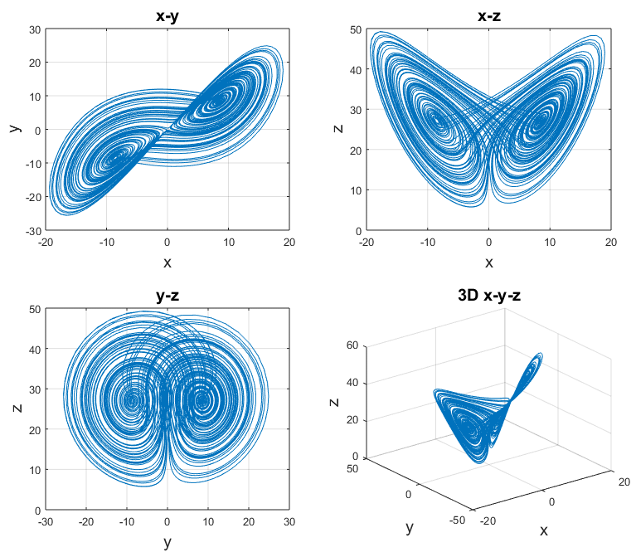 Since these strange attractors are essentially fractal in aspect, they are innately linked to nature. Described as early as the Renaissance by Leonardo da Vinci, the ways in which trees’ branches are structured follow the patterns of fractals – as indeed do other widely varied natural phenomena, including the structure of clouds, blood vessels, and snowflakes. Of course, since fractals iterate infinitely and these natural examples are finite, the comparison to fractals is approximate. Nonetheless, the links between nature, humans, and mathematical chaos theory are extraordinarily powerfully present here. Thus, one can surmise that not only do humans seek to use mathematics to explain such immense concepts such as chaos and randomness themselves, but also to explain far smaller and closer-to-home ideas, such as those examples clearly present within the natural world.

A further aspect of chaos theory that is particularly applicable to this discussion of the reasons behind humanity’s search for clarity in chaos is the idea of deterministic chaos. The phrase itself sounds oxymoronic, since particularly in colloquial speech chaos represents a complete lack of order whereas determinism is order so complete that all events are clearly set out before they occur. However, the idea of deterministic chaos was defined simply by the vital figure of Edward Norton Lorenz:

In terms of an easily comprehendible model for chaotic versus non-chaotic systems, the idea of a pendulum can be used. A simple pendulum, swinging in a dynamical system is a perfect example of a non-chaotic system – one can predict what will happen next, at what time, and (most importantly of all) one can explain why. However, by visualising a swinging pendulum with another independently swinging pendulum attached to the end, one can begin to visualise a chaotic system. By tracking the line drawn by the end of the second pendulum, a shape very similar to the x-z view of the Lorenz attractor (pictured above) is created. This model of a chaotic system illustrates the idea of deterministic chaos perfectly. The pendulum moves very chaotically, but it is (crucially) sensitive to its initial conditions. Thereby, it is both deterministic (its future is defined by its present state) and chaotic (its approximate present, meaning the way it moves at a given point, does not approximately define its future, meaning that it will not move in exactly the same way in the future).

In conclusion, chaos theory is just one part of a patchwork of examples where mathematicians have made sense of what seems completely random and unordered. Firstly, Lorenz’s discovery that chaotic systems are in fact sensitive to initial conditions represents an extremely important factor when discussing pattern at all. That mathematicians have found that the smallest events in the present can have widely significant implications in the future perhaps has implications not just for mathematics, but also for humanity’s worldview in general. Is it too bold to suggest that Lorenz’s ‘butterfly effect’ puts to rest existentialism? Perhaps. What is less ambiguous though is the actively tangible implications of the fact that chaos theory can be applied to nature. This allows us to begin to make sense of the natural world, of which so much seems secret, chaotic and beyond our understanding. Overall, the idea that even in chaos, mathematicians have been able to find order and clarity, demonstrates just how far the human response to pattern and order is able to go, through the medium of mathematics.