Hello maths fans! Welcome to the 184th Carnival of Mathematics with your host Dr Tom Crawford. After accidentally starting a trend (see Carnival 167) with listing fun facts about the number of the carnival, here are my favourites about the number 184:

Now that’s out of the way, the only place to start the carnival proper is with Chris Smith and his bold/reckless (delete as appropriate) attempt to come up with 50 interesting puzzles during lockdown. You can find them all on the playlist below – a few personal favourites being number 24 number 42 (naturally).

Speaking of the universe and everything in it, AlephJamesA has been writing about Hyperion – one of the many moons of Saturn. It’s egg-like shape gives rise to a chaotic rotation, which is pretty darn cool.

Continuing the theme, The Universe of Discourse tells us about ‘weird constants in math problems’. I’d argue that could be the title of pretty much any maths blog ever written, but here Mark chooses to focus on Monte Carlo methods for finding the expected number and size of continuously filled bins… And that’s not all. Mark’s been keeping himself busy with a double entry into this month’s carnival via a discussion of Taylor versus Maclaurin series, which provides me with the perfect opportunity to share this (from Reddit of course):

Mark is of course not the only one who’s been keeping busy during lockdown, as my student Joe can attest. He decided to build his very own mechanical sine wave machine which draws perfect sine waves by converting circular motion into a wave pattern. Find out how he did it in the video below.

Next up flags. Who doesn’t love a good flag? Oh, just me and Peter Rowlett then… A lovely puzzle as part of the IMA series asks us whether it’s possible to create 20 unique flags from only 5 coloured strips. Like Mark before him, Peter’s been modelling his behaviour on London buses as he also offers a lovely discussion of the idea of mathematical modelling through the eyes of his young son.

And now onto the month itself. July was yet another bad month of 2020 for many reasons, but losing the great Ronald Graham chief among them. On the Akamai blog, his friend Tom Leighton talks about his life and contributions to the field of mathematics. Further personal stories from RJ Lipton and KW Regan can be found at Godel’s Lost Letter and P=NP. RIP Ron. 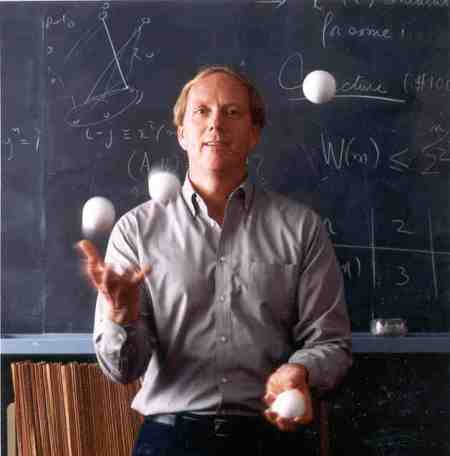 July also saw a significant vote in Russia with changes to the constitution clearing the way for Putin to extend his presidential rule until 2036. Props to Arseny Khakhalin for analysing the voter data and finding all kinds of – let’s say ‘mysterious’ – mathematical phenomena…

We have more magic and mystery abound with Comfortably Numbered discussing phantom horses and the Moire Pattern, while Dan McQuillan tells us all about vertex-magic graphs.

Matthew Scroggs tries to cheer us all up by inventing new maths celebration days in the form of approximations to expressions involving famous numbers. Happy 4√2+e-8 Approximation Day everyone! (Find out which date I’m celebrating at the bottom of the page).

For something a little different, head over at the JHI blog, where E.L. Meszaros talks about the authorship conventions of Babylonian mathematical texts and what we can learn from them in today’s academic environment.

And finally, one of my new favourite words: Desarguesian. I’m happy to admit I’ve never heard of it until I read this post from Senia Sheydvasser and now I can’t get enough – non-Desarguesian or otherwise.

A huge thanks as always to Katie and the team at the Aperiodical for organising the carnival, and thanks to you – the readers – for taking part in the monthly mathematical bonanza. Keep rocking maths.

Huge thanks to @cheltcollege for hosting me last week and to all of the students for their brilliant questions. I hear you’re all still getting your head around the ‘time-travelling’ fluids experiment… #tomrocksmaths #cheltenhamcollege #schooltalk
Really enjoyed talking to Rani Singh and Suzanne Guest on River Radio last weekend about how you can find maths in every aspect of our lives and my journey with Tom Rocks Maths to make maths fun for everyone! Listen to the full show (including my music choices from Blink-182, Bring Me The Horizon and the Red Hot Chili Peppers) at tomrocksmaths.com (link on profile) #tomrocksmaths #riverradio #rockmusic
Caption this - I'll start. "Hey Anna, check out all of the Pokémon I've caught, have you ever seen such an amazing collection?" Watch the full closing ceremony and discover all of the other fantastic events from the final day of the 2021 Heidelberg Laureate Forum at tomrocksmaths.com #tomrocksmaths #HLF21 #captioncontest
Another fantastic article from TRM intern Justin Leung for you to enjoy on a Tuesday evening... Learn the history of complex numbers and how they are used today in air traffic control to prevent collisions. And don't forget to try the puzzle questions! Image shows a visualisation of the imaginary roots of a quadratic equation. Read the full article at tomrocksmaths.com (link on profile) #tomrocksmaths #complexnumbers #radar
Shoutout to the Cheney School sixth form students for coming to my talk on Maths and Sport and taking some (mostly) excellent penalties. I wish I had the confidence of the guy that missed by approximately 20 yards… #tomrocksmaths #penaltykick #cheney
Huge congratulations to all of the students that matriculated yesterday @oxford_uni !! Matriculation is the official process of joining the university and requires everyone to dress in traditional academic dress or what we call ’sub-fusc’. I managed to do a sort of matriculation myself, as I finally had the chance to sign the ‘buttery book’ to mark my fellowship @stedmundhall. The book is signed by all incoming fellows at the college, which is incredible when you think about all of the amazing people that have been a part of Teddy Hall. The signing should have happened alongside my swearing in ceremony last October but has been delayed by 12 months due to COVID. #tomrocksmaths #teddyhall #oxforduniversity