Maths, but not as you know it… (St Hugh’s College Oxford Magazine)

In October 2017, Dr Tom Crawford joined St Hugh’s as a Lecturer in Mathematics. He has since launched his own award-winning outreach programme via his website tomrocksmaths.com and in the process became a household name across Oxford University as the ‘Naked Mathematician’. Here, Tom looks back on the past year… 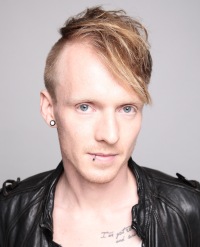 I arrived at St Hugh’s not really knowing what I was getting into to be completely honest. I’d left a stable and very enjoyable job as a science journalist working with the BBC, to take a leap into the unknown and go it alone in the world of maths communication and outreach. The plan was for the Lectureship at St Hugh’s to provide a monthly salary, whilst I attempted to do my best to make everyone love maths as much as I do. A fool’s errand perhaps to some, but one that I now realise I was born to do.

The ‘Naked Mathematician’ idea came out of my time with the Naked Scientists – a production company that specialises in broadcasting science news internationally via the radio and podcasts. The idea of the name was that we were stripping back science to the basics to make it easier to understand – much like Jamie Oliver and his ‘Naked Chef’ persona. Being predominantly a radio programme, it was relatively easy to leave the rest up to the listener’s imagination, but as I transitioned into video I realised that I could no longer hide behind suggestion and implication. If I was going to stick with the ‘Naked’ idea, it would have to be for real. 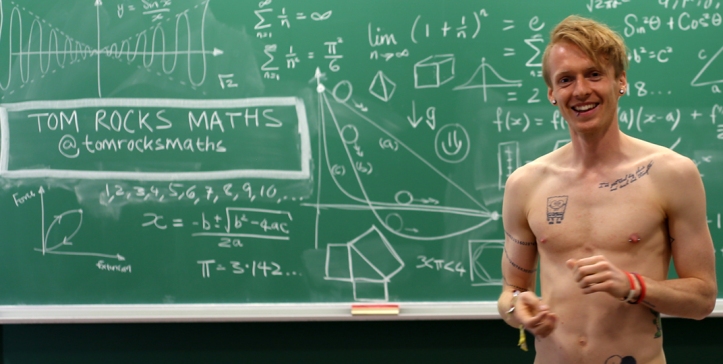 Fortunately, the more I thought about it, the more it made sense. Here I was, trying to take on the stereotype of maths as a boring, dreary, serious subject and I thought to myself ‘what’s the best way to make something less serious? Do it in your underwear of course!’ And so, the Naked Mathematician was born.

At the time of writing, the ‘Equations Stripped’ series has received over 100,000 views – that’s 100,000 people who have listened to some maths that they perhaps otherwise wouldn’t have, if it was presented in the usual lecture style. For me that’s a huge victory.

Of course, not all of my outreach work involves taking my clothes off – I’m not sure I’d be allowed in any schools for one! I also answer questions sent in by the viewers at home. The idea behind this is very simple: people send their questions in to me @tomrocksmaths and I select my favourite three which are then put to a vote on social media. The question with the most votes is the one that I answer in my next video. So far, we’ve had everything from ‘how many ping-pong balls would it take to raise the Titanic from the ocean floor?’ and ‘what is the best way to win at Monopoly?’ to much more mathematical themed questions such as ‘what is the Gamma Function?’ and ‘what are the most basic mathematical axioms?’ (I’ve included a few of the other votes below for you to have a guess at which question you think might have won – answers at the bottom.)

The key idea behind this project is that by allowing the audience to become a part of the process, they will hopefully feel more affinity to the subject, and ultimately take a greater interest in the video and the mathematical content that it contains. I’ve seen numerous examples of students sharing the vote with their friends to try to ensure that their question wins; or sharing the final video proud that they were the one who submitted the winning question. By generating passion, excitement and enthusiasm for the subject of maths, I hope to be able to improve its image in society, and I believe that small victories, such as a student sharing a maths-based post on social media, provide the first steps along the path towards achieving this goal.

Speaking of goals, I have to talk about ‘Maths v Sport’. It is by far the most popular of all of my talks, having featured this past year at the Cambridge Science Festival, the Oxford Maths Festival and the upcoming New Scientist Live event in September. It even resulted in me landing a role as the Daily Mirror’s ‘penalty kick expert’ when I was asked to analyse the England football team’s penalty shootout victory over Colombia in the last 16 of the World Cup! Most of the success of a penalty kick comes down to placement of the shot, with an 80% of a goal when aiming for the ‘unsaveable zone’, compared to only a 50% chance of success when aiming elsewhere.

In Maths v Sport I talk about three of my favourite sports – football, running and rowing – and the maths that we can use to analyse them. Can we predict where a free-kick will go before it’s taken? What is the fastest a human being can ever hope to run a marathon? Where is the best place in the world to attempt to break a rowing world record? Maths has all of the answers and some of them might just surprise you…

Another talk that has proved to be very popular is on the topic of ‘Ancient Greek Mathematicians’, which in true Tom Rocks Maths style involves a toga costume. The toga became infamous during the FameLab competition earlier this year, with my victory in the Oxford heats featured in the Oxford Mail. The competition requires scientists to explain a topic in their subject to an audience in a pub, in only 3 minutes. My thinking was that if I tell a pub full of punters that I’m going to talk about maths they won’t want to listen, but if I show up in a toga and start telling stories of deceit and murder from Ancient Greece then maybe I’ll keep their attention! This became the basis of the Ancient Greek Mathematicians talk where I discuss my favourite shapes, tell the story of a mathematician thrown overboard from a ship for being too clever, and explain what caused Archimedes to get so excited that he ran naked through the streets. 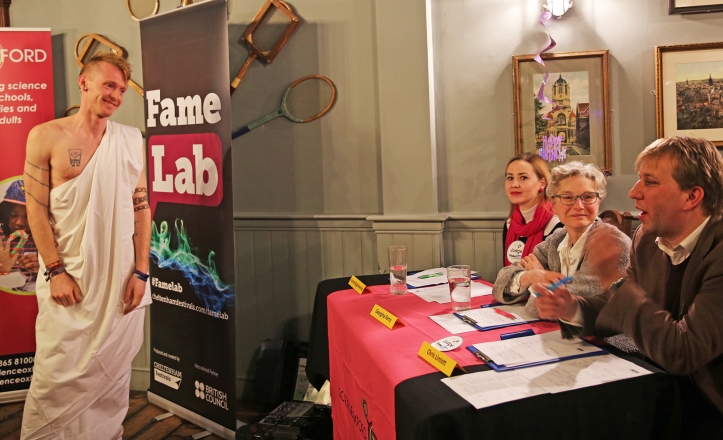 This summer has seen the expansion of the Tom Rocks Maths team with the addition of two undergraduate students as part of a summer research project in maths communication and outreach. St John’s undergraduate Kai Laddiman has been discussing machine learning and the problem of P vs NP using his background in computer science, while St Hugh’s maths and philosophy student Joe Double has been talking all things aliens whilst also telling us to play nice! Joe’s article in particular has proven to be real hit and was published by both Oxford Sparks and Science Oxford – well worth a read if you want to know how game theory can be used to help to reduce the problem of deforestation.

Looking forward to next year, I’m very excited to announce that the Funbers series with the BBC will be continuing. Now on its 25th episode, each week I take a look at a different number in more detail than anyone ever really should, to tell you everything you didn’t realise you’ve secretly always wanted to know about it. Highlights so far include Feigenbaum’s Constant and the fastest route into chaos, my favourite number ‘e’ and its link to finance, and the competition for the unluckiest number in the world between 8, 13 and 17.

The past year really has been quite the adventure and I can happily say I’ve enjoyed every minute of it. Everyone at St Hugh’s has been so welcoming and supportive of everything that I’m trying to do to make maths mainstream. I haven’t even mentioned my students who have been really fantastic and always happy to promote my work, and perhaps more importantly to tell me when things aren’t quite working!

The year ended with a really big surprise (at least to me) when I was selected as a joint-winner in the Outreach and Widening Participation category at the OxTALENT awards for my work with Tom Rocks Maths, and I can honestly say that such recognition would not have been possible without the support I have received from the college. I arrived at St Hugh’s not really knowing what to expect, and I can now say that I’ve found myself a family.

Answers to votes (watch by clicking the links):

The 'Code-Breaking' series from TRM intern Georgie continues with the infamous RSA algorithm. I had the pleasure of meeting the fathers of modern cryptography at the Heidelberg Laureate Forum - Whitfield Diffie and Martin Hellman - who were kind enough to pose for a selfie* :) Read the article at tomrocksmaths.com (link on profile) *I had to photoshop the two together however (it's probably pretty obvious) #tomrocksmaths #RSA #cryptography
As an avid @spongebob fan (in case the tattoo didn't give it away) this is one of the best uses of @desmosinc I've ever seen!! A huge thank you to Precalc SS at Chappaqua CSD and Mr Valencia for sharing this with me - you folks rock :) #tomrocksmaths #spongebob #math
This week’s song from my playlist is all about being drunk - so here’s me with some friends in Sofia after a few too many beers… Listen to @panicatthedisco ‘Don’t Threaten Me With A Good Time’ via the ‘Music’ page at tomrocksmaths.com (link on profile) #tomrocksmaths #bulgaria #mathsontour
A question for you to ponder this rainy Saturday - where is this on my body? And what maths can you see? Photo by Chris Uren @sthughscollege #tomrocksmaths #tattoos #mathstattoo
Throwback to @vidcon London 2020 and meeting these amazing creators - @lokmanvideo (video games) @deutschmitmarija (learn German) @2romansergeev (animated textbooks) - fingers crossed we can hang out again in 2022!! #tomrocksmaths #vidconldn #vidcon
NEW VIDEO: The most incredible formula for pi you will ever see - the infinite product of each prime number divided by its nearest multiple of 4, equals pi/4. Amazing. Join the premiere at 3pm (GMT +1) for the live chat with Tom and Isaac (narrator and producer) at tomrocksmaths.com (link on profile) #tomrocksmaths #pi #piformula