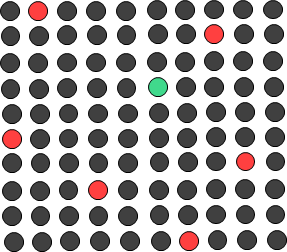 NEW VIDEO: How do we define a subspace of a larger vector space? And what is the Subspace Test? Essential learning for university/college level linear algebra. Premieres today at 3pm (GMT) - see you in the live chat! Watch on the Tom Rocks Maths YouTube channel (link on profile) #tomrocksmaths #linearalgebra #subspacetest
Tattoo #47 - Question Mark Cat. It’s a cat made from a question mark. Tattoo by @nat_von_b. #tomrocksmaths #cattattoo #questionmarkcat
Are you even a tourist in Copenhagen if you don’t take a photo with the Little Mermaid statue? The fairy tales of Hans Christian Andersen span 9 volumes with 156 stories which have been translated into 125 languages. He lived until the age of 70, so assuming he started writing at the age of 20, how many stories did he write each year? And more importantly why is the answer pi? #tomrocksmaths #copenhagen #littlemermaid
Very excited to be joining the legendary members of Festival Of The Spoken Nerd on stage @ri_science for 'An Evening Of Unnecessary Detail' on Feb 26th. I will again be attempting to do some comedy (warning: results may vary). Image: mock-up of what the show might look like… Get your tickets via the ‘Events’ page at tomrocksmaths.com (link on profile) #tomrocksmaths #FOTSN #royalinstitution
The final article from the brilliant Ioana Bouros looks at the Mohr-Mascheroni Theorem and how we can construct all Euclidean objects using only a compass... Featuring lots of example videos for you to follow along with at home - enjoy! Read/watch at tomrocksmaths.com (link on profile) #tomrocksmaths #mohr #mascheroni
The Latin Bridge in Sarajevo where Archduke Franz Ferdinand and his wife Sophie Duchess of Hohenberg were assassinated in June 1914 - often described as one of the key events which led to World War I. The Archduke was heir presumptive to the Austro-Hungarian throne which at its peak covered regions of 10 different countries. Can you name them all? #tomrocksmaths #franzferdinand #sarajevo