Let’s set the scene. You’re driving alone at night along an empty road through the woods. It’s rumoured to be haunted, but you’re not particularly scared – you don’t believe in ghosts anyway. Then a spectral figure appears directly in front of you. You slam on the breaks, but as soon as you come to a stop the ghostly image has disappeared. Was it just your brain playing tricks on you? Or are the rumours true?

Even though you might still not say that ghosts are definitely real, you’d probably believe that the chance of ghosts existing is a little higher now than it was before. This is Bayes’ Theorem in action.

When you find new evidence that either supports or opposes your current view, you may update your beliefs using this new data. Mathematically, this can be represented as what we call a ‘conditional probability’.

So far so familiar, so let’s make things a little trickier. Suppose we want to work out the conditional probability of rolling a six, given the number rolled is even. This just means what is the probability of rolling a six when we already know that we have definitely rolled an even number. Now, there are 3 possible even numbers to roll, one of which is 6. As all the numbers are equally likely there is a ⅓ chance of the even number rolled being 6.

On the other hand, if we reverse the statement, then the conditional probability of rolling an even number given we know the number rolled is a 6 must be 1, since 6 is an even number.

What we’ve actually calculated here is the general formula for Bayes’ Theorem.

That’s quite a mouthful, so let’s again use our dice as an example.

Not so bad after all!

The dice example hopefully makes sense, but Bayes’ theorem can often be counterintuitive.  Consider the following:

“Steve has been described by a neighbour as shy, withdrawn and invariably helpful but with very little interest in people or in the world of reality. A meek and tidy soul, he has a need for order and structure, and a passion for detail.”

Is Steve more likely to be a librarian or a farmer? 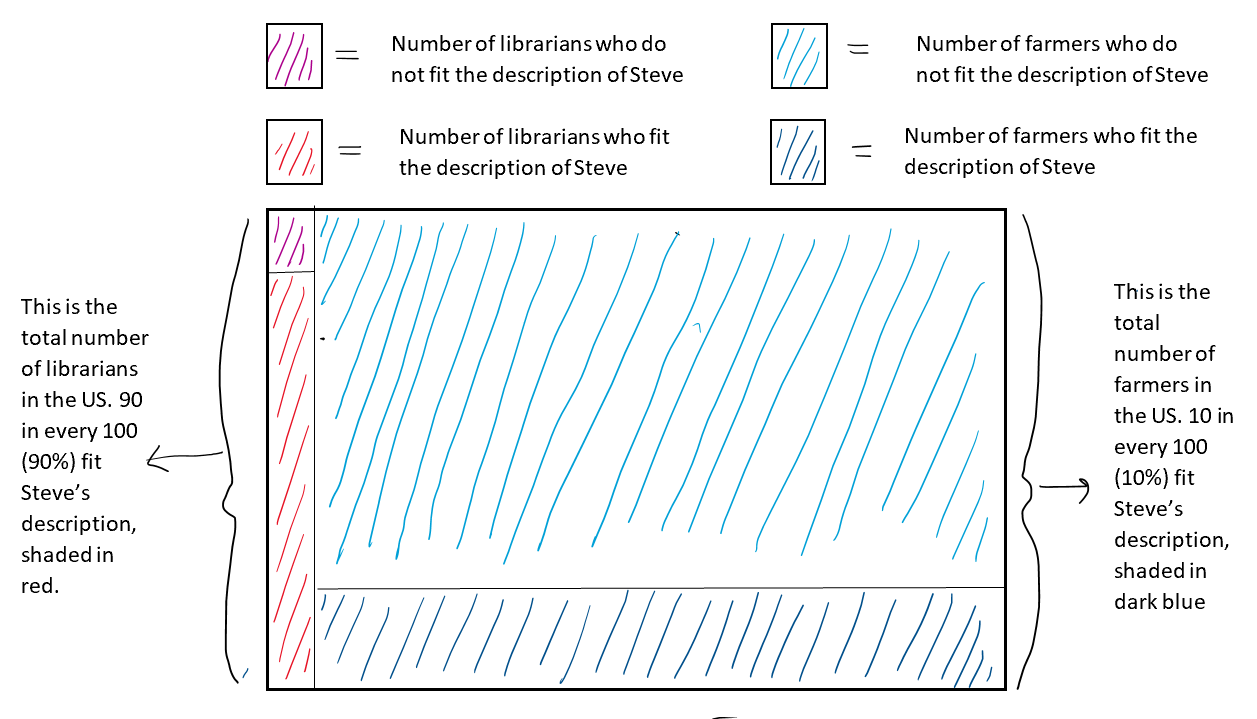 This is not about how correct our stereotypes of farmers and librarians are. Instead, it shows that many people don’t even think to ask how many farmers there are in comparison to librarians, which as you can see, will change the result dramatically. In other words, the information available to you is key in your decision making.

As I’m assuming you don’t normally spend your time guessing the jobs of people named Steve, let’s look at some more practical applications of Bayes’ Theorem.

When insurers calculate your insurance policy and your premium costs, they consider the conditional probability of an accident happening given your personal risk factors. This is why they ask for your age and your job amongst other things, because these will increase or lower your risk. Young drivers are most likely to have an accident in the first year of driving, so if you’re a new driver, your insurance may cost more than your car does!

As if dealing with your insurance company after an incident isn’t bad enough, usually your premiums then become more expensive, because you’re more likely to have another accident again. Similarly, if your house has been flooded, your home insurance policy will become more expensive, because the new probability of your house flooding given it has been flooded before is much higher.

You can thank Bayes for that…

You may have heard the phrase “lightning never strikes the same place twice”. Clearly, this is rubbish – the Empire State Building is struck by lightning between 25 and 100 times per year! If it’s a tall, conducting object like the Empire State Building is struck, it’s very likely that it will be hit again because it’s a good target. This also can be understood with Bayes’ Theorem.

Another very common use of Bayes’ Theorem is when filtering your email inbox. Most email accounts will filter out spam or junk email automatically, but how do they decide whether an email is spam?

Without Bayes’ Theorem, filters would mark any email containing a specific set of words as spam. This could mean that all emails containing the words ‘Nigerian Prince’ and ‘bank details’ are automatically rejected as spam. Unfortunately, if you are African royalty, some non-spam emails will also be rejected, because they contain the spam words the filter checks for.

Let’s pretend you’re an email spam filter and you receive the following emails. Which ones are spam, and which ones are real? (Answers at the bottom of the page)

Without realising, you were probably just using Bayes’ Theorem.

However, this of course means that if a spam email contains a lot of ‘normal’ text it may not be filtered out. The filter can be improved when you mark an email as spam or non-spam manually. It will work out which words are common in your spam emails, and which are not, so can change how it calculates the probability of an email being spam. So don’t worry, your holiday romance with a Nigerian prince is safe from interference!

A final example (and one of my favourites) of Bayes’ Theorem is from the Second World War.

This created a coded message that was incredibly complicated to crack without the Enigma Machine itself. To make things even harder, the machine settings were changed every day, so at the stroke of midnight, all the previous work was worthless (a sort of Cinderella for mathematicians). For every sequence of letters there is an almost infinite number of possible translations, and testing all of these would take weeks, by which time the code would have changed. A quick and reliable method of cracking the code was required by the British and their allies to decipher these messages.

An A-Team of code breakers were gathered together in the now-famous Bletchley Park. People from all over the country were called up in total secrecy, including mathematicians, linguists, and even winners of a nationwide cryptic crossword competition! So those puzzle games on your phone might actually be making you a better code breaker…

This team, led by Alan Turing, suggested only the most likely possible translations should be tested. For example, every morning at 6am a weather report was broadcast. Wetterbericht is the German word for weather report. The code breakers could place the word wetterbericht underneath the coded message, and if any letters were the same, they knew they had matched up the word to the code incorrectly. Let’s consider the following example:

Here you can see that only the second matching can be correct, as in the top and bottom row there are matching letters.

This decoded part of the message (known as a crib) can then be used to work out the rest of the message. The probability of this deciphered message being correct is much higher, because the codebreakers only used phrases that were very likely to appear in the message in the first place. From this knowledge of the code, the working of the enigma machine could be discovered and recreated, allowing Nazi messages to be reliably and quickly decoded. Who could have known that such a small equation could save so many lives?

The work at Bletchley Park was so vital to the war effort, it was kept a secret until the 1970s, and even then the full story wasn’t known until the 1990s. Two papers written by Alan Turing at the time were only released in 2012 – 67 years after the Second World War ended.

Understanding Bayes’ Theorem was crucial to the eventual defeat of the Nazis almost 75 years ago, but there are still many cases today where conditional probabilities applied incorrectly may have life-threatening consequences. As we shall see in the rest of this series of articles, this seemingly simple equation could be the difference between life in prison and walking free, and can help to explain why accurate tests for diseases are so vital to stop outbreaks.

Answers: All 3 emails are spam, but 1 and 3 are particularly dangerous phishing emails – emails that try to get you to give up personal data and passwords. How could you specifically filter out phishing emails from the spam?

For any maths teachers out there looking for some inspiration to bring technology into the classroom, make sure you check out my talk with @maplemathmatters on Maple Learn. I've found it incredibly useful for bringing to life the Oxford undergraduate calculus course with 3D graphs and interactive exercises - find out how it all works in the video at tomrocksmaths.com (link on profile) #tomrocksmaths #maplesoft #maplelearn
The next stop on our journey into the mathematical universe with TRM intern Charlie is a 4D world where colour gradients are as important as positions in 3D space... Learn about the incredible properties of Quaternions and the story of their discovery by William Hamilton in 1847 at tomrocksmaths.com (link on profile) #tomrocksmaths #quaternions #complexnumbers
The second stop on our journey across the mathematical universe is ‘Fluid Planet’. The whole surface of the gas giant is in a constant state of motion which means partial differential equations (PDEs) are key to modelling this alien world… Find out more about the ‘Heat Equation’ in the latest article from TRM intern Charlie Ahrendts at tomrocksmaths.com (link on profile) #tomrocksmaths #fluiddynamics #heatequation
Last day skiing today so obviously had to pose for a photo… The highest point on the mountain is 719m, with a 65% drop to the bottom of the resort where this sign is located. At what height was this photo taken? #tomrocksmaths #finland #yllas
Stop 1 on our journey into the mathematical universe is 'Positivity Planet'. These friendly aliens don't have the concept of negative numbers - much like the Ancient Civilizations of Earth - and so have to use other clever methods when it comes to modelling things such as projectile motion… Read more at tomrocksmaths.com (link on profile) #tomrocksmaths #negativenumbers #mathematicaluniverse
Aurora Borealis at KP index 2. The sky was crystal clear but the moon was the brightest I’ve ever seen - this was taken without a flash! The KP number system is a scale of geomagnetic activity which gives you a measure of how strong the Northern Lights will be. It ranges from 0 to 9 with a KP index of 7 meaning they’d be visible as far down as Oxford. #tomrocksmaths #northernlights #aurora