I recently showed my friends a Desmos (online graphing calculator) project of a hypercube that I made, and I was met with confusion about how it is possible for us to visualise 4D. This inspired me to write and create in Desmos an accessible discussion for how we can think about higher dimensions. The project works towards understanding how to create a simple visual representation of the hypercube, while also teaching the importance of abstraction in mathematics!

When thinking about how to visualise a higher dimensional cube, it will help to first think about how we look at a 3D cube on a 2D screen. That is what the canvas above shows.

On the canvas, there is a set of 3 axes (x, y, and z) representing 3D space. The green cube is a 3D object. We want to look at this object on a 2D screen.

If we think of the xy-plane (the plane spanned by the red and blue axes) as our screen, the black lines show what we see of our green cube on the screen. We call this image of our cube on the screen its ‘projection’.

The purple box shows what we would see if we were looking at the screen head on.

The question is, how do we generate this projection?

EXERCISE: Drag the black point around to try and make the green cube line up with its projection. When you do, what do you notice? What does this tell you about the process?

ANSWER: The two line up when you are either looking down at the green cube from directly above it, or looking up at it from directly below. This tells you that the projection is created by effectively flattening the green cube onto the screen in a direction parallel to the z-axis (orange axis).

Also note that when you line the two up, what you see is identical to what is shown on the purple screen. Why is this?

EXERCISE: Say one vertex of the green cube has coordinates (x,y,z). As you move it vertically down to the xy-plane, what does its coordinate become?

ANSWER: It becomes (x,y,0). This is because as we move the vertex down, its x and y coordinates don’t change since it is always above the same point on the xy-plane. However, its z coordinate decreases to zero.

Overall, we can conclude that given some point (x,y,z), to project it onto the xy-plane we keep its x and y coordinates the same and make all other coordinates (ie the z coordinate in this case) zero.

This is called the orthogonal (or orthographic) projection. If two things are orthogonal, they are at 90 degrees to each other. Why do you think the projection is given this name?

We have talked about the orthogonal projection in 3D, and now we can think about generalising it to higher dimensions. We have to begin by thinking about what a ‘higher dimension’ means.

Points in 2D have the form (x,y), and the entirety of 2D space can be thought of as the set of all possible points (x,y). 3D points are of the form (x,y,z), and similarly 3D space is the collection of all such points.

It may be weird to think about this at first, however the reason for making these definitions is such that we can abstract the concept of an n-dimensional space away from the real world (which is limited to n=3).

If we consider objects and concepts just in terms of these definitions, we see that many familiar ideas, such as squares/cubes, circles/spheres and the orthogonal projection can be generalised.

We now extend our orthogonal projection to higher dimensions. Say we want to project a 4D point (x,y,z,w) onto the xy-plane. You can still think of the xy-plane as a 2D screen, but this time it is placed inside 4D space and you are using it to view a 4D object.

Similar to 3D, we keep the x and y coordinates of the point fixed, and make all other coordinates (ie. z and w) zero. This gives us (x,y,0,0) as our projected point.

We now discuss the process of visualising a 4D cube.

We call the n-dimensional generalisation of the square an ‘n-square’. The familiar 2D square is therefore the ‘2-square’. We call the cube a ‘3-square’. It follows that the 4D cube (hypercube) is the ‘4-square’.

EXERCISE: How many vertices does a 4-square have? Can you list them out, or describe how you would list them? What about an n-square?

ANSWER 1: We see that the vertices of the 2-square are all possible combinations of two numbers, each either a 0 or a 1. Order matters here, since (0,1) is not the same as (1,0). Now the same goes for a 3-square. Its vertices are all possible ordered triplets of 0s and 1s.

Once we have all the vertices of a 4-square, we can scale it, move it around and rotate it, if we wish. Then we can project it onto our screen (the xy-plane) by sending each vertex of the form (x,y,z,w) to (x,y,0,0).

This process is exactly what’s being done in the link below to visualise a 4-square! The 4-square is moving since we are showing it being rotated as it is projected. 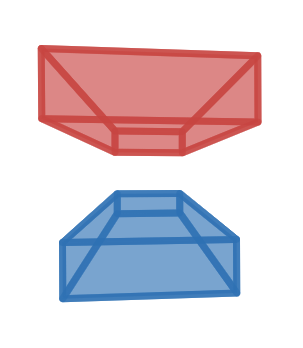 Some extra discussions that may be of interest are below.

What would we do if we don’t want to project onto the xy-plane? In other words, what if our screen doesn’t happen to be the xy-plane?

To answer this, say we want to project n-dimensional space (denoted as R^n) onto a plane P. We can apply a transformation T (specifically a translation followed by a rotation) to R^n. This will give us a transformed version of the space, T(R^n). We want T to be such that after the transformation, the plane P coincides with the xy-plane. We can then project T(R^n) onto the xy-plane for the same effect as projecting R^n onto P. This is because R^n relative to P is identical to T(R^n) relative to the xy-plane.

EXERCISE: Define the Euclidean norm of a point (x1,x2,…,xn) to be the square root of x1^2 + x2^2 + … + xn^2. The unit n-dimensional sphere is defined to be the set of all points in R^n with Euclidean norm 1. Describe what you see when you take the orthographic projection of a unit n-dimensional sphere centred on the origin onto the xy-plane. Here n is greater than or equal to 3. First you should think about the 3D sphere, and what its projection looks like.

You can find more entries from the Teddy Rocks Maths Competition here.

The Royal Danish Library in Copenhagen, aka the “black diamond”. It holds 42.5 million items making it the 9th largest library in the world. The Danish population is only 5.8 million which means more than 7 books per person. Which ones make your list? #tomrocksmaths #blackdiamond #royaldanishlibrary
NEW VIDEO: How do we define a subspace of a larger vector space? And what is the Subspace Test? Essential learning for university/college level linear algebra. Premieres today at 3pm (GMT) - see you in the live chat! Watch on the Tom Rocks Maths YouTube channel (link on profile) #tomrocksmaths #linearalgebra #subspacetest
Tattoo #47 - Question Mark Cat. It’s a cat made from a question mark. Tattoo by @nat_von_b. #tomrocksmaths #cattattoo #questionmarkcat
Are you even a tourist in Copenhagen if you don’t take a photo with the Little Mermaid statue? The fairy tales of Hans Christian Andersen span 9 volumes with 156 stories which have been translated into 125 languages. He lived until the age of 70, so assuming he started writing at the age of 20, how many stories did he write each year? And more importantly why is the answer pi? #tomrocksmaths #copenhagen #littlemermaid
Very excited to be joining the legendary members of Festival Of The Spoken Nerd on stage @ri_science for 'An Evening Of Unnecessary Detail' on Feb 26th. I will again be attempting to do some comedy (warning: results may vary). Image: mock-up of what the show might look like… Get your tickets via the ‘Events’ page at tomrocksmaths.com (link on profile) #tomrocksmaths #FOTSN #royalinstitution
The final article from the brilliant Ioana Bouros looks at the Mohr-Mascheroni Theorem and how we can construct all Euclidean objects using only a compass... Featuring lots of example videos for you to follow along with at home - enjoy! Read/watch at tomrocksmaths.com (link on profile) #tomrocksmaths #mohr #mascheroni